What is Semantic Parsing?

Previously, most semantic parsing tasks make use of Seq2Seq model. It was first introduced into this area by (Dong & Lapata, 2016). With a single neural network, it soon beat all the other rule-based human-written semantic parsing techniques. The authors also propose seq2tree because semantic sentences always have hierarchical structure. Seq2seq structures are easy to build with toolkits. 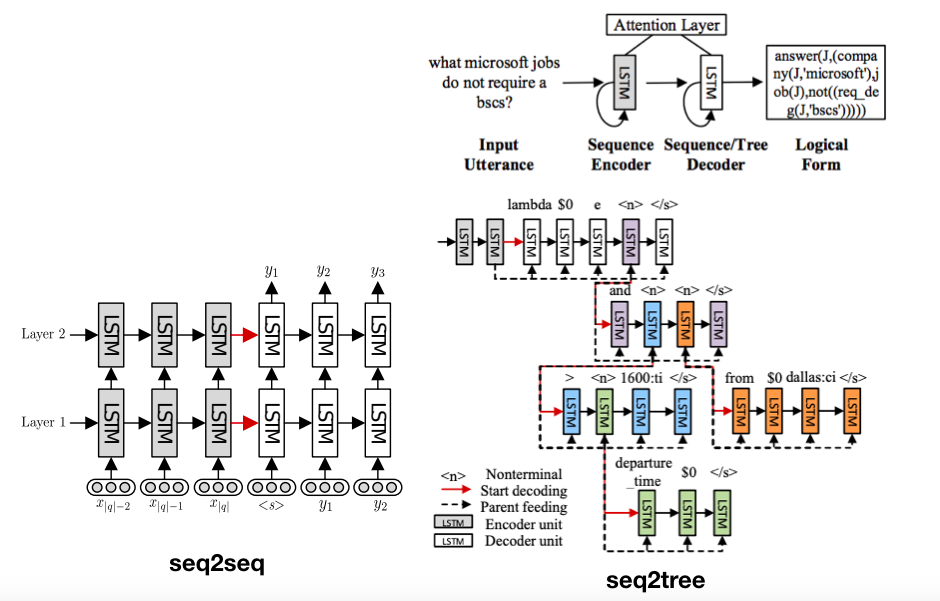 Recently, the neural-symbolic paradigm has been extensively explored in the tasks of semantic parsing. Concretely, for these tasks, neural networks are used to map raw signals (images/questions/instructions) to symbolic representations (scenes/programs/actions), which are then used to perform symbolic reasoning/execution to generate final outputs. Weak supervision in these tasks usually provides pairs of raw inputs and final outputs, with intermediate symbolic representations unobserved. 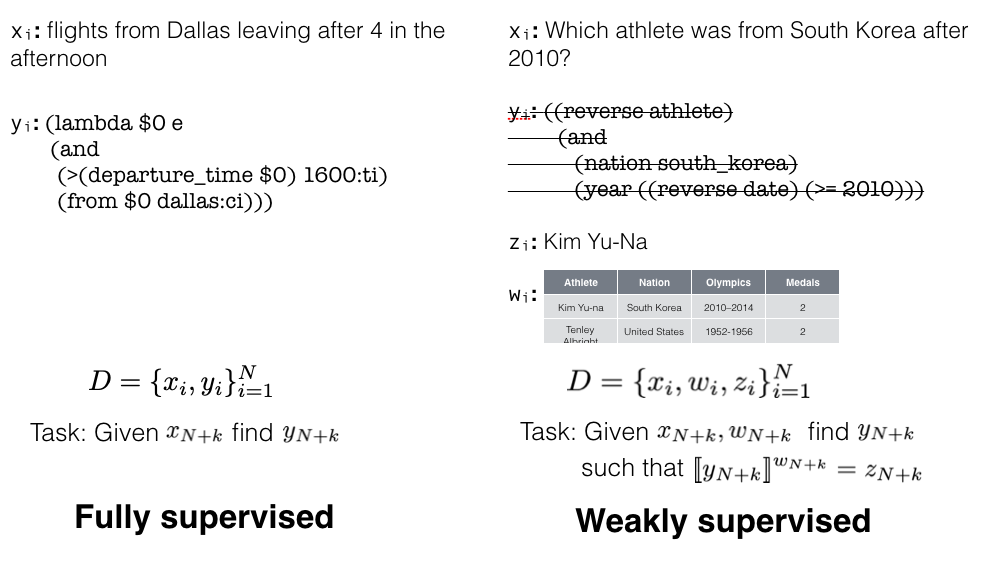 Back to our paper, “Neural Symbolic Machines: Learning Semantic Parsers on Freebase with Weak Supervision”.

Seq2seq has a good performance. However it also has several disadvantages:

The authors present a manager-programmer-computer framework, in which the generated programs are executed sequentially. 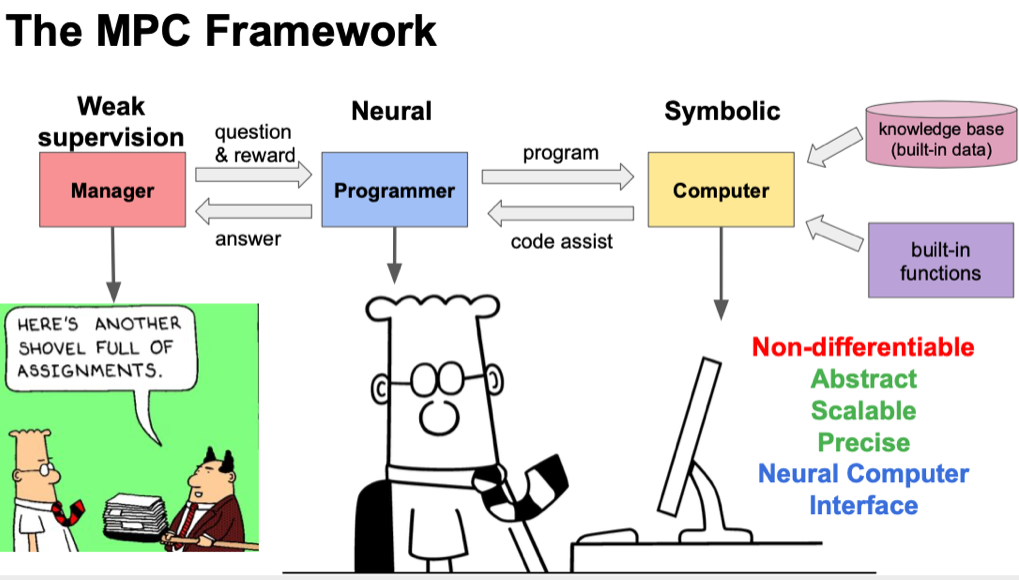 They use the WebQuestions dataset. It contains 5810 questions crawled from Google Suggest API and answered using Amazon MTurk. Specifically, they have 3778 questions for training and 2032 for testing. A question may have multiple answers using Avg.F1 as main evaluation metric.

In fact, their computer -or symbolic part, is similar to Lisp, which is a high-level language with uniform syntax.

It’s composed of some predefined functions (F A0…Ak) where F is the function name and A0…Ak are variables (v) or relations (r).

They add a key-variable memory to seq2seq model for compositionality. The ‘keys’ are the outputs of GRUs. The ‘variables’ are just symbols referencing results in computer: ‘R1’, ‘R2’, and maybe used for the computer in the next stage.

THerefore, they train the model using augmented REINFORCE, in which they first do iterative maximum likelihood(ML) to find pseudo-gold programs with rewards 1. Train the ML part using this pesudo-gold programs as ground truth. Then they add this program to the REINFORCE beam, giving it with a relative large reward. The whole algorithm is presented below: 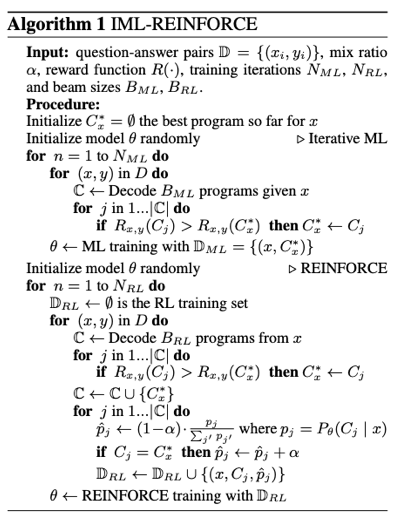 Their performance significantly outperforms others.

There are many works focusing on addressing the REINFORCE problems mentioned above. 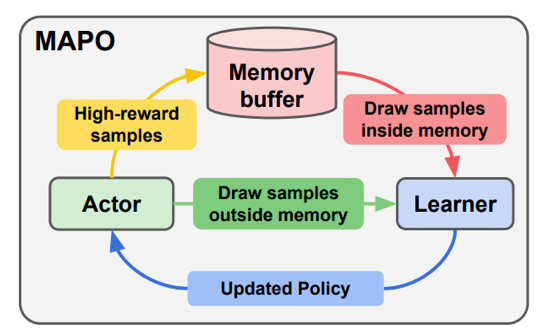 The other one aims to bridge the gap between Maximum Marginal Likelihood and Reinforcement Learning. The new algorithm guards against spurious programs by combining the systematic search traditionally employed in MML with the randomized exploration of RL, and by updating parameters such that probability is spread more evenly across consistent programs.

The Neural-Symbolic VQA and Neural-Symbolic Concept Learner are two papers that work on the VQA dataset CLEVR. Semantic parsing is also a crucial part of VQA. The questions are parsed into programs, which are then executed on the input images to get the answers. They use reinforcement learning to joinyly train the scene and semantic part.

Math word probelems are quite similar to semantic parsing. MathDQN: Solving Arithmetic Word Problems via Deep Reinforcement Learning is the first attempt to introduce deep reinforcement learning to solve arithmetic word problems. The motivation is that deep Q-network has witnessed success in solving various problems with big search space and achieves promising performance in terms of both accuracy and running time. So they design the states, actions, reward function, together with a feed-forward neural network as the deep Q-network and propose MathDQN.

Learning to Generalize from Sparse and Underspecified Rewards consider the problem of learning from sparse and underspecified rewards, where an agent receives a complex input, such as a natural language instruction, and needs to generate a complex response, such as an action sequence, while only receiving binary success-failure feedback. They address exploration by using a mode covering direction of KL divergence to collect a diverse set of successful trajectories, followed by a mode seeking KL divergence to train a robust policy.